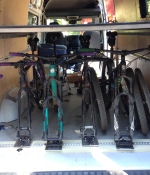 This is our way of storing bikes in our Sprinter Campervan.  We wanted to be able to securely store four bikes in our van with easy loading and unloading. The design of our Sprinter has a platform bed and large garage for storage of bikes, surfboards, camp gear, and “stuff.” I’ve seen many cool ways of… Read More ›

Life in the Mountains- The Balancing Act of Adrenaline and Beauty

Sometimes we don’t know whether to keep moving or to stop to look at the view. There are so many ways to enjoy the outdoors.  So many ways to combine exercise, fresh air, natural beauty, adrenaline, and the simple joy of being outdoors. A few weeks ago we were riding mountain bikes and making lots… Read More ›

Dread and Terror on the NUT

Sometimes great adventure happens when you pick a destination you know nothing about. We had an  unplanned day on a road trip to Bend, Oregon and were looking for an epic one-day adventure.  A friend suggested the North Umpqua Trail (he had never done it, and we had never heard of it).  After a bit… Read More ›

This is my final “long-term” review of the Sette Razzo SC XX 29er mountain bike. You can also read the first two parts of the review- Part One- Initial Impressions and Part Two- the First 100 Miles. As of this writing (November 2012), I’ve had the bike for about 8 months.  So far I’ve logged… Read More ›

Riding the Redwoods in Fort Bragg and Mendocino

Located on California’s North Coast, Mendocino and Fort Bragg are on the verge of becoming a “bucket list” mountain bike travel destination.  Imagine 100+ miles of smooth forested singletrack winding up and down through the steep canyons of Jackson State Forest.  Tight, twisty singletrack among redwoods and ferns.  Long climbs and flowing descents.  Oh yeah!… Read More ›

Editor’s Note:  This is H’s review of her first custom bike.  She is exceedingly humble and doesn’t like to talk about herself, despite a phenomenal resume as a bike racer.  She has multiple national championship titles (in mountain, road, track, and collegiate racing).  Her credits include 2-time Masters National XC champion, 2-time Masters National Super-D… Read More ›

“Ghost Town.”  Just saying it brings visions of cowboys and gunfights on dusty streets.  The stuff of old movies. There are hundreds (if not thousands) of ghost towns in the American West.  Dilapidated and broken buildings are a testament to broken dreams and tough people in search of the American Dream.  Discoveries of silver and… Read More ›

Hole in the Ground trail is another classic Tahoe mountain bike ride.  One of the early highlights is climbing to 8200′ along Andesite Ridge before descending into a granite playground.  The top of the ridge is mostly rock and devoid of trees.  This gives huge panoramic views spilling out along both sides of the ridge. … Read More ›

OutdoorPix- The Bridges of Downieville

The Bridges of Downieville Downieville is a classic California mountain bike destination.  Located at the confluence of the Downie and Yuba rivers, this former mining boomtown reinvented itself as an outdoor destination for mountain biking. Most people do the ride as a downhill shuttle.  We did the ride as an out-and-back and were blown away… Read More ›