So why buy an “off-brand” high end carbon fiber bike?

I’ve been looking for a carbon hardtail 29er for a while.  I narrowed my choices down to the Cannondale Flash Carbon 1, or the Santa Cruz Highball.  Both are in the SRAM XX/Shimano XTR range.  After some consideration, I realized that I’ve owned nine (9!) Cannondales (mountain, road, tandem, touring, cyclocross), and a bunch of other brands as well.  I really like Cannondale, but since they moved their manufacturing to China (like everyone else) I have no more brand loyalty.  I’m currently riding a Cannondale Rize- one of the last bikes Cannondale made in the USA.

My decision to buy a SETTE came down to the following:

Not that I need to establish my credentials (it’s the internet after all), but it’s helpful to know where I’m coming from.  I’m an outdoor nut and I ride bikes- a lot.  I do a number of other outdoor sports as well, but cycling is my main recreational activity.  I grew up in Fairfax, Marin County (so-called birthplace of mountain biking) and have been riding bikes since I was 8.  In 20+ years of adult cycling, I’ve logged well over 100,000 miles on the bike.  Mountain, road, commuting, loaded touring, tandem, vintage bikes, town bikes, cyclocross.  Steel, Titanium, Carbon, Aluminum.  Rigid, front suspension, full suspension.  Owned them all at one time or another.  Although I don’t race anymore, I’ve raced mountain, road, and cyclocross.  Really I’m just a big kid who loves riding bikes.

In terms of mountain biking, I’m definitely on the XC end of the scale.  I love technical singletrack, climbing, and descending.  Fire roads are usually just a way of getting to more singletrack.  I’d rather climb and descend than descend only.  I fortunate to split my riding time between Tahoe (rocky, mountainous), and Marin County (foresty, hilly).  I still have a 5″ travel dual suspension bike, and I plan on always keeping one in the stable.

Last comment before the actual bike review.  This isn’t going to be a “I have this bike so it rules!!!” review. Or a technical assessment of the head tube angle and other minutia.  Or a review of SRAM XX- XX and XTR are both going to perform well, with some key design differences.  This is a totally subjective review of my impressions of frame quality, bike build quality, ride, and longevity.  Take it with a grain of salt.

Enough Banter, Let’s get to the Sette Razzo!

Here she is. (Springer spaniel not included).

I ordered the Razzo on a Saturday afternoon on a holiday weekend and had the bike delivered on Wednesday afternoon (in Northern California).  PricePoint sent a shipping confirmation within a couple hours of placing the order.  So far, so good.

The bike came in a large box (duh, no actually it seemed larger than a normal bike box).  Actually, it was double walled, double boxed!  The packaging weighed 27 pounds- more than the bike.

Packaging was great and met all standards.  As a former part time bike shop guy, I’ve assembled dozens of bikes.  The Razzo was more complete than many bikes I’ve built.  It took me less than 30 minutes to have the bike unpacked and ready to ride (I’ve done this before).

Assembly was as follows:

Flashy! SETTE prominently displayed all over the frame, along with other marketing stuff.  A bit gaudy, but a minor issue (Reminds me of an old bike I had with CANNONDALE  in neon yellow lettering no less than 13 times on the frame).  Okay, not quite that bad, but still lots of marketing stuff.  Nice glossy black/red color scheme.  The internal cable routing makes the bike look really clean.  The carbon layup looks tight and professional so far.

Getting ready for assembly

The overall assembly quality was spot on.  Cables were trimmed to the right length, bolts tightened, etc.  Derailleur cables appear to be teflon coated- nice touch for an XX level bike.  The only issue with the assembly is that the front and rear derailleur barrel adjusters were backed “out” more than I’d like which doesn’t leave a lot of room to accommodate for cable stretch adjustments in the future.  Other than that, looks great so far!

The stock tires on the Razzo XX are ridiculous.  Stan’s “The Crow” 2.0 tires make most semi-slicks look beefy.  Tire spec on a high end bike is a minor issue, and totally subjective.  Change ’em if you don’t like them.  I was prepared and had already ordered tires that I know and like.  The Stan’s Crow would probably be okay on a hardpack short track XC course or bike path, but totally impractical for real world wet, rocky, rooty riding.

I suspect that PricePoint spec’d the Stan’s Crow because they are very light and made the bike come in under 21 pounds (more on weight later).  The Razzo XX came set up with tubes.  I suspect most riders will pull the tubes and run tubeless immediately (if not, you should).  In my case I pulled the tires and tubes immediately.  I installed a Maxxis Ignitor 2.1 on the rear, and  Schwalbe Racing Ralph 2.4 on the front with 1.5 scoops of Stan’s in each tire.

Frame/tire clearance with Maxxis Ignitor 2.1 (not a great pic, more than it looks like). 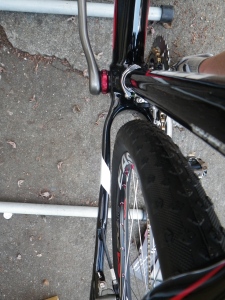 I like a narrower tire on the back and a big, floaty, round, predictable tire on the front.  One of the selling points of the Razzo XX is that the Easton wheelset is set up to run tubeless without do-it-yourself tape. 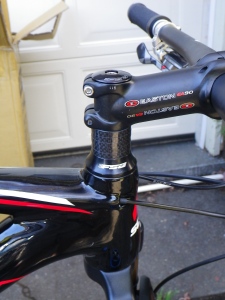 Although the pic above shows the the internal cable routing, top tube/down tube bonding, and tapered headset, I inserted it for a different purpose.  PricePoint left the steerer tube long, with some carbon spacers.  This is a subtle, but important detail.  It allows the rider flexibility to adjust the stem height for dialed in bike fitting.  Keep it high, or lower it and cut off the extra.  Many steerer tubes come trimmed really short, with little rider adjustability.  Nice touch, PricePoint.

Another major concern I had about the Razzo was the frame/tire clearance.  I’m happy to report that this is a non-issue.  Prior to it showing up on the FedEx truck I’d never seen a Sette Razzo.  The pics on the PricePoint web page didn’t show the frame clearance clearly.  I’ve seen several 29ers with ridiculously tight clearance (where frame designers were trying to keep the wheelbase short and compromised the frame clearance instead).  With inadequate clearance, real world stuff like mud, or a wheel knocked out of true can mean walking or messing up the chainstays.  PricePoint got this right, and I’d be totally comfortable running a 2.2 or even 2.3 in the back.

18 minutes out of the box to this

Aside from bouncing up and down on the shock on the bike shop floor and squeezing the brake levers, everyone wants to know how much a new bike weighs.  I have a cheap digital hanging scale- so here goes. 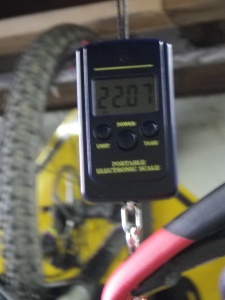 22.07 pounds as I’m going to ride it every day- with pedals, real tires (tubeless with Stans), cages, bell, HRM mount.

The real world weight as I’m going to ride the bike came in at 22.07 pounds.  Sorry for the fuzzy pic (I took several, best I got). 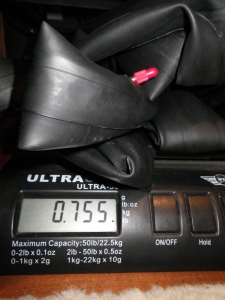 As noted before, the Razzo XX came set up tubed.  Most people in this bike range are going to run tubeless anyway, so you’ll likely lose a little weight on the conversion.  Most riders (except die hard weight weenies) are going to run Stan’s in their tires for flat/leak protection.  I use 1.5 scoops of Stan’s sealant in each tire.  (Just an aside for those not using Stan’s.  The stuff works great.  On the last tire I changed out, I realized that Stans sealed at least 5 holes in the tire.  I never even noticed any leaking).