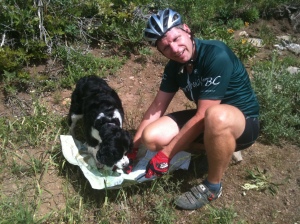 Daisy- "Helping" read the map at an unmarked intersection

Every outdoor adventurer know this experience all too well-  exploring new territory and coming across an intersection that wasn’t on the map.  Or this one- realizing you’ve made a wrong turn miles ago.

One of the great things about Tahoe is that each part of the lake has a network of neighborhood “social” trails used by locals to hike and bike in their own neighborhoods.

Inspired by Park City, Utah’s epic (and well signed) trail system, we decided to go one step further on our neighborhood trails and start getting trail signs up on some of the major unmarked intersections.

With that in mind, we made up some trail signs and biked/hiked out to start marking intersections.  It’s an excuse to get out for another adventure and do some backcountry community service as well. 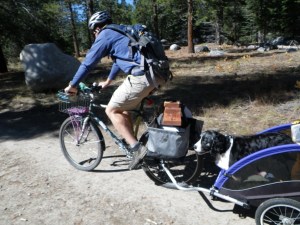 We rode out about 5.5 miles with Daisy Trail Dog and the signs, then hiked another 3+ miles in marking intersections along General Creek Trail. 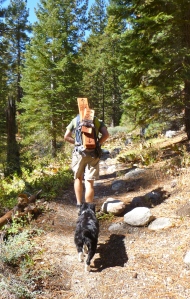 First bike, then hiking the new signs in.

Getting set up to hang signs

One of the reasons for this adventure is to make the trails more accessible.  Making it easier for people to find their way outdoors is better for everyone.  Some of these trails (General Creek in particular), are fantastic, bike/hike/horse legal trails that are being overgrown from lack of use. 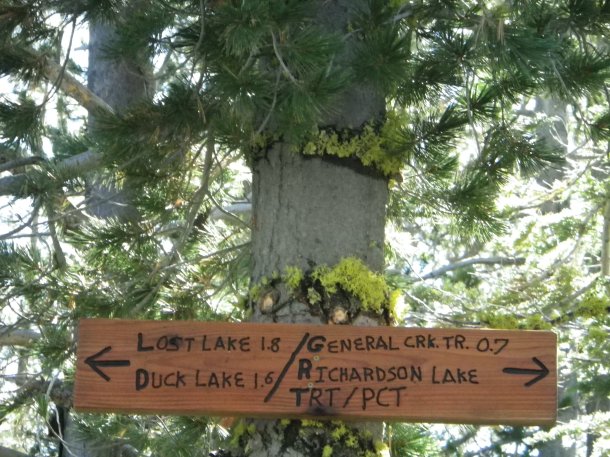 After- I can see clearly now!

After marking the Lost Lake- Sugar Pine intersection we headed out further to mark out the old spur of General Creek trail that heads to the PCT and Lake Genevieve.

The only markers for General Creek Trail are a series of cairns.

General Creek Trail is an important connector from the West Shore to the Pacific Crest Trail/Tahoe Rim Trail, Rubicon Trail, Richardson Lake, Lost Lake, etc.  Once you leave Sugar Point Point State Park, there is minimal signage to direct trail users.  General Creek Trail is on every map, but it’s becoming overgrown from lack of use.  It’s lack of use comes, in part, from the fact that there are few trail markers.  It’s taken us 6 years to find this intersection, and we live in the neighborhood!  Another trail user left a series of rock cairns and did some clearing.  We’ll fix that…

H and Daisy Trail Dog at the trailhead

Am I worried about the trails getting trashed?  Not really.  These trails are so far off the beaten path that only fit, outdoorsy people will make it this far.

With our work done, we started exploring the area.  We came across this old USFS Desolation Wilderness sign lying in some rocks, it’s 4×4 post snapped off.  While I’d like to think something natural occurred, I suspect vandalism by OHVs or snowmobiles.  Backcountry vandalism is something I’ve never really understood…

All in all, a pretty good day.  11 miles on bike, 7 on foot, a little community service, and some great views along the way.